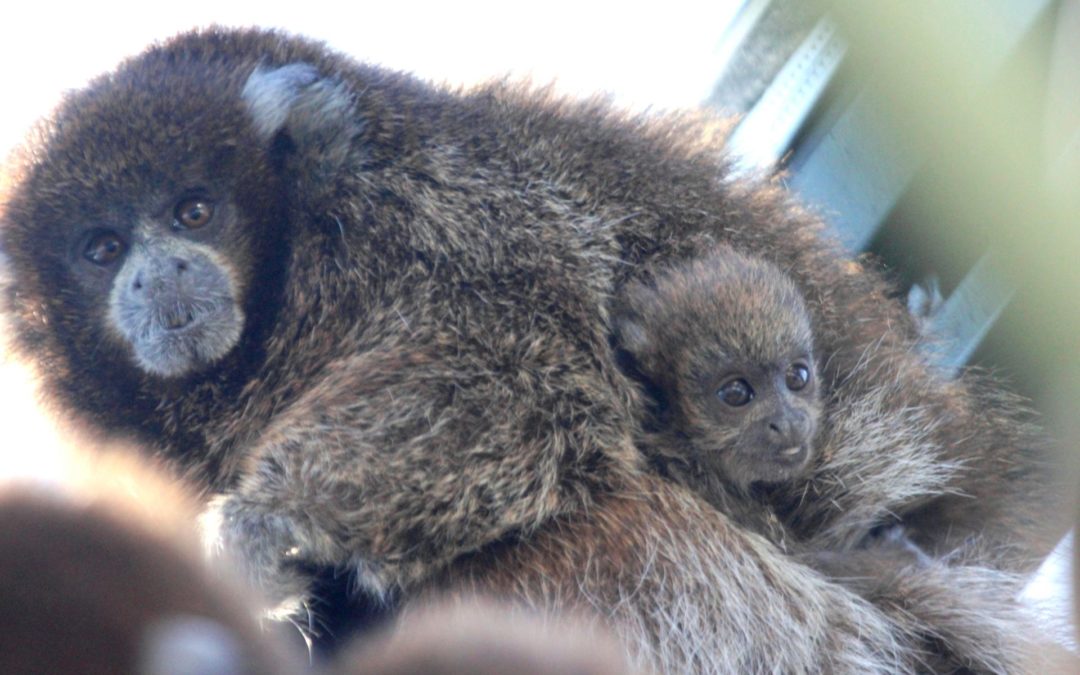 It’s official- the first baby born at the Buttonwood Park Zoo in 2020 is a Bolivian gray titi monkey! Born January 12, 2020, this is the third birth for 11 year-old mom, Madeira and 5 year-old father, Crumpet.

This Bolivian gray titi monkey family has been growing since 2017, with the initial birth of son Biscuit, who is now 2 and ½ years old. In December of 2018, daughter Mila was born, evening out the family dynamics. For the first several months, the new baby will mostly remain on the back of its parents or siblings – Zoo staff will be able to determine gender once is spends more time off its family.

There are less than 55 Bolivian gray titi monkeys at 18 Association of Zoos and Aquariums (AZA) accredited institutions in North America. These tree dwelling monkeys weigh around two to three pounds as adults, have a lifespan of 20-25 years and are active during the day. Members of the group exhibit social bonding by sitting side by side and twining their tails. There is a strong bond between adult mating pairs; they stay close and carry out activities together, including infant care. The new baby will spend approximately 80% of the time on the back of dad, Crumpet.

In the wild, this species is found in the tropical forests throughout central Bolivia and into Rondônia in eastern Brazil. Although their population in the wild is decreasing and agricultural activities have resulted in considerable habitat loss, Bolivian gray titi monkeys are reasonably tolerant of habitat disturbance and are adaptable to a variety of environments throughout its relatively wide range.

Crumpet, Madeira, Biscuit, Mila and the new baby reside in the Zoo’s innovative Rainforest, Rivers & Reefs exhibit. Opened in July 2017, Rainforests, Rivers & Reefs focuses on the conservation of endangered and threatened Neotropical forest species and the health of the world’s oceans while connecting guests with small, endangered primates from regions of South America and ocean dwelling species from around the world.  Interpretive signage and on-site education inspires visitors to take small, tangible actions to reduce their impact on habitats and oceans, furthering the Zoo’s conservation mission to protect wildlife from extinction.