Harbor seals are one of the most widespread of the pinnipeds. Historically, harbor seals have suffered population drops due to viral diseases similar to distemper. Because harbor seals haul out on nearshore and coastal mainland sites, they are exposed to terrestrial wild carnivores, pets and feral animals, and waste from human populations, which creates an increased risk of exposure to communicable diseases. Harbor seals are also threatened by water pollution and commercial fishing practices.

The Buttonwood Park Zoo participates in the Association of Zoos and Aquariums Species Survival Plan (SSP) for Atlantic Harbor Seals. The goal of the SSP is to cooperatively manage animal populations within AZA accredited zoos to ensure the sustainability of a healthy and genetically diverse population while enhancing the conservation of this species in the wild.

Yellow and Blue are the Buttonwood Park Zoo’s beloved mother-son pair of harbor seals. Yellow, now 38 years old, came to the Zoo in 1983 after being found orphaned along a Cape Cod beach. Yellow gave birth to Blue in June of 2003 and these two have been thriving under the expert care here at the Zoo ever since. Both seals have a strong relationship with their keepers which allows for hands-on vet exams and close monitoring of their health and general well-being.  Yellow and Blue know more than 25 trained behaviors and these include stationing on a scale, allowing keepers to brush their teeth, place drops in their eyes and even present themselves for x-rays, vaccines and blood draws.

Anywhere from cool, temperate waters to cold, arctic and sub-arctic coasts. They spend half their time in the sea and half on land.

Seals will nap at the surface of the water in a position called “bottling”. They bob up and down in the water like a buoy, with just their heads above the surface! 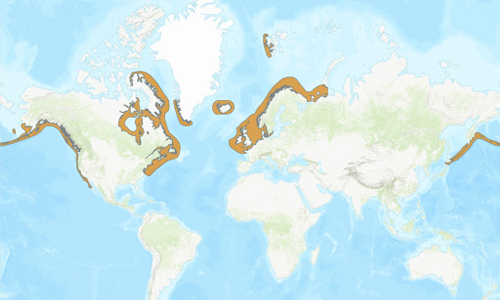 They have the widest distribution of any seal and live in both the North Atlantic and Northern Pacific oceans.