Bison once roamed in herds numbering in the millions dominating prairie and forest ecosystems. In the 19th century, market, subsistence and recreational hunting nearly eliminated the bison throughout its range in North America. By the 1890s, there were fewer than 1,000 of these animals left on the continent. Conservation measures have brought about limited recovery in the wild and in captive conservation herds. Existing threats include habitat loss, hybridization in managed populations and low genetic diversity among individual herds.

Bison once had the widest natural range of any North American herbivore. They can inhabit arid regions and areas with deep snow cover.

Often used interchangeably, bison and buffalo represent two different types of animals. Bison are found strictly in North America and Europe while buffalo are found in Africa and Asia. Bison became the official national mammal of the United States in 2016. 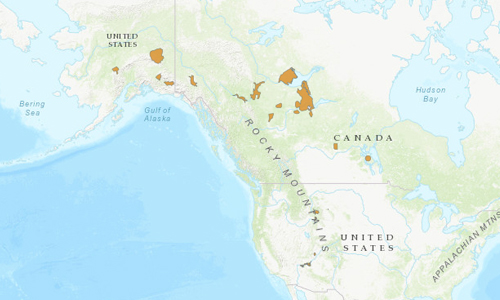 The original North American range for bison extended from northern Mexico up to Alaska. The species’ current range is restricted by land use and wildlife management policies. Bison functioning as wild currently occupy less than 1.2% of their original range.

May be considered threatened with extinction in the near future