Between 1964 and 1986, the emperor goose population in Alaska went from roughly 140,000 birds down to 42,000. Their numbers have since increased, but emperor geese are still at risk due to hunting and coastal oil pollution. This species is sensitive to recent climate change and is expected to undergo a moderate population reduction in the future due to habitat loss in their breeding grounds. It is estimated that their habitat may decrease by as much as 54% by 2070.

Breeds in coastal salt marshes and winters along ice-free coasts

Emperor geese exhibit a monogamous mating system and will bond with a different goose only if the previous mate dies. 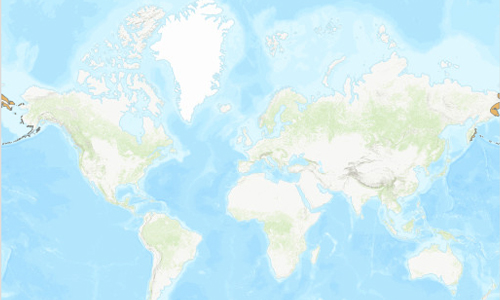 Restricted to the Bering Sea. Breeds in Arctic and subarctic Alaska, United States and extreme northeast coastal Russia. Winters along ice-free coasts of the Aleutian Islands and, in smaller numbers, in Canada and the Alaska Peninsula, with very few reaching as far south as California

May be considered threatened with extinction in the near future