You are here: » About the Zoo » Master Plan

The Buttonwood Park Zoo has embarked on a visionary, yet highly practical, three-phase master plan to redevelop the Zoo’s seven-acre campus over the next 15 years. The $25 million-dollar campaign transforms the Zoo’s physical footprint, expands our ability to play a significant role in world wildlife conservation and veterinary science, and provides the infrastructure for the very best possible care for each animal. Environmental education lies at the heart of the plan, with enhanced facilities and new opportunities for both formal and informal learning. Implementation of the master plan also significantly strengthens the Zoo’s role as community anchor and economic influencer for greater New Bedford. Buttonwood Park Zoo is small, but its potential impact is mighty.

With outstanding leadership, dedicated staff, a committed community and a firm foundation on which to build, BPZOO can, and must, play a vital role in protecting wild animals, connecting both children and adults to nature, and building a better New Bedford. 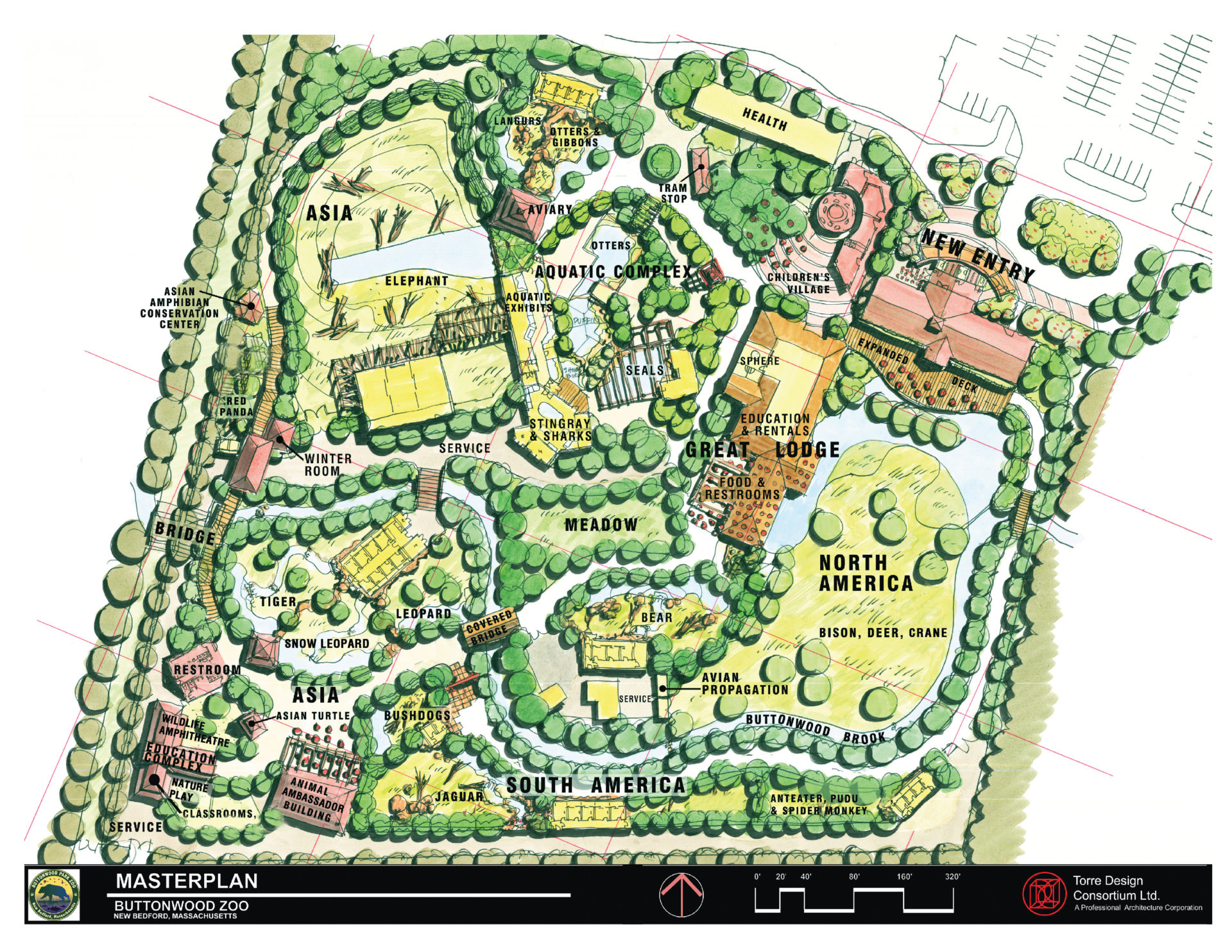 How was the master plan developed?

The Zoo worked with a world-renowned zoological architect to develop a comprehensive blueprint for the Zoo’s future. Between 2014 and 2016 the plan was reviewed by many community leaders and organizations; much of that feedback was incorporated into the revised plan.

What were the goals of the master plan process?

When developing the plan, the Zoo wanted to focus on four key components 1) Conservation of threatened and endangered species and outstanding animal care 2) Excellence in environmental education programming 3) Experiences that appeal to a wider demographic, and 4) A plan that was both realistic to build and cost effective to operate.

How much will this plan cost to construct and how will it be funded?

The current construction estimate is around $25 million. Funding will come from both public and private donor sources. This plan comes in at a fraction of the cost of previous Zoo master plans and will cost less than most other plans being developed for zoos regionally and nationally.

How long will it take to build?

The master plan calls for redevelopment of the Zoo over the next 15 years. Work on the plan began in 2017.

How much of the Master Plan has been completed? At what cost?

Will the Zoo expand its footprint into Buttonwood Park as part of this master plan?

How will the Zoo work to conserve threatened and endangered species?

The Zoo will redevelop in a way that directly impacts the conservation of threatened and endangered wildlife. The Zoo is creating habitats that are stimulating for the animals and immersive for guests, and which incorporate educational messages and inspire action. Additionally, the Zoo will be developing and sponsoring field conservation programs to help stave off extinction of these threatened species.

Does this mean there will be fewer native species at the Zoo?

The local media has described the new plan to include many exotic animals. What does that mean?

The term exotic animal typically refers to exotic pets that a person may own. The term is less applicable in a zoo situation as a cougar, native to North America, is just as “exotic” as a snow leopard, native to Asia. Unfortunately, many in the community have assumed exotic refers to animals from warm, tropical locations, which is not an accurate way to describe the new species included in the plan. The Zoo will incorporate threatened or endangered species to raise awareness of the plight of both local and global species.

Will the new “global” species identified in the plan thrive in New Bedford?

Most of the new habitats being developed at the Zoo will be for animals that are well suited for the climate of New Bedford. These include cold weather thriving Amur tigers, snow leopards, Amur Leopards, red pandas, Andean bears, and Atlantic puffins. Some critically endangered species from warmer climates have also been selected and will have direct access to lush climate-controlled environments.

What is the plan for the Zoo’s elephants?

The Zoo has previously announced that once Emily and Ruth pass away, the Zoo will no longer be home to elephants. Based on the geriatric state and unique special needs of Emily and Ruth, the Zoo created an expanded habitat that will better meet their needs in their remaining years. Once they pass, the Zoo will incorporate Indian rhinos into this habitat. Much of the design features that have been put into the elephant habitat expansion are well suited for rhinos. In the future, the Zoo will develop programs to help protect this magnificent rhino species whose numbers in the wild are estimated at only 3,000.

As part of its master plan, the Zoo will create the new Nature Connection Education Center (NCEC). The goal of the NCEC is to connect the community, particularly children, to nature. This nature connection is of critical importance when you consider that the average child spends just four to seven minutes in unstructured play each day and more than seven hours each day in front of a digital screen.

What will the impact be on the community?

The Zoo will continue to create positive economic impact in New Bedford by attracting thousands of annual guests from outside the community to the Zoo and the city. The Zoo will also become an even greater community resource where families and students can come together to gain a better appreciation of wildlife and become inspired to help protect our planet’s natural resources.